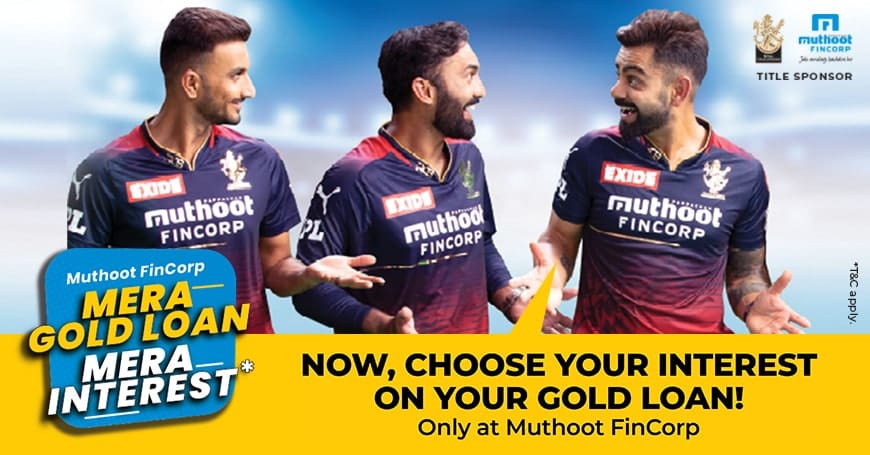 Known for his witty sense of humour on and off the field, Kohli once again took fans by storm with his new amusing avatars in the TVC alongside RCB teammates Dinesh Karthik, Mohammed Siraj, Harshal Patel and Finn Allen, all of whom highlighted the importance of the scheme in the life of a common man.

“Muthoot FinCorp, has always been the pioneer in bringing out innovative campaign thoughts aimed at helping the common man to improve their financial well-being. As the pandemic has subsided to a relatively low level and businesses are inching back to normal, we are launching a special scheme ‘Mera Gold Loan, Mera Interest’. This would help them to plan their finances better and would help them improve their livelihood,” said Thomas George Muthoot, Director, Muthoot FinCorp Ltd.

Muthoot FinCorp has been associated with Royal Challengers Bangalore as the team’s title sponsor for the third successive year. The core message of the campaign appealed to the customers as they can exercise their freedom while choosing their interest rate. In one of the videos that was released recently, Kohli was seen in a teacher’ avatar surprising ‘student’ Siraj by offering him options of rewards for performing well in the class.

Take a look at the TVC:

In the other yet to be released videos, Kohli will be seen donning the role of a doctor and asking Kiwi cricketer Allen about rewards such as donuts, pizza, burger and pastries for remaining fit while in an umpire’s role, he will be asking batsman Karthik his choice of delivery as Siraj looked on curiously.

The company, which has operations across the country through 3500-plus branches and over 30000 employees serving over five million customers, had earlier encouraged consumers to adapt to Blue Soch in order to come out successful in their lives. While the common man was facing unforeseen challenges and was stuck in life with no concrete movement ahead during the pandemic time, Muthoot Fincorp exhorted people to change the way they think and adopt a positive attitude in life, fondly called the ‘Blue Soch’.

The Faf du Plessis-led Royal Challengers Bangalore has won three matches from five games so far in the ongoing IPL.