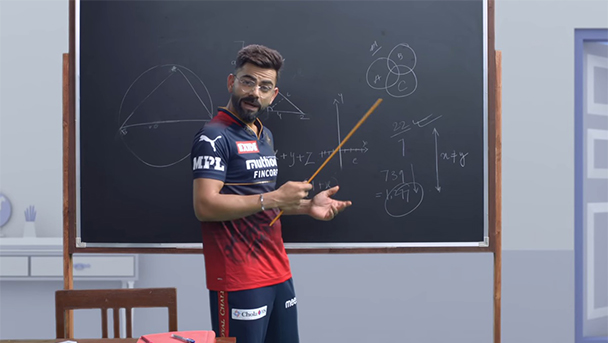 Muthoot FinCorp has launched the ‘Mera Gold Loan, Mera Interest’ campaign with cricketer Virat Kohli. The campaign aims to highlight its new concept that customers can exercise their freedom while choosing the interest rate on their gold loan. With a 360 degree approach, the campaign will be amplified across television, digital content, social media and out-of-home (OOH) integrations during the Tata IPL 2022. It is to be noted that the company has been associated with Royal Challengers Bangalore as the team’s title sponsor for the third successive year.

In the three television commercials (TVC), Kohli appears in three different avatars along with other players of Royal Challengers Bangalore. In one of the films that was released recently, Kohli is seen in the role of a teacher, surprising his student –played by Mohammed Siraj– by offering him options of rewards for performing well in the class. In the other yet to be released videos, Kohli will be seen donning the role of a doctor and asking Finn Allen about rewards such as donuts, pizza, burger and pastries for remaining fit. While in an umpire’s role, he will be shown asking Dinesh Karthik his choice of delivery as Mohammed Siraj witnesses the exchange.

For Thomas George Muthoot, director, Muthoot FinCorp Ltd, the company has always been the pioneer in bringing out innovative campaign thoughts aimed at helping the common man to improve their financial well being. “As the pandemic has subsided to a relatively low level and businesses are inching back to normal, we are launching a scheme ‘Mera Gold Loan, Mera Interest’. This would help them to plan their finances better and would help them improve their livelihood,” he added.

Muthoot Pappachan Group (MPG), also known as Muthoot Blue, has been providing solutions, services and expertise to customers across the country in various domains such as multiple NBFCs with multiple products within retail financial services, sports initiatives, CSR initiatives, automotive, realty, hospitality, IT and alternate energy.