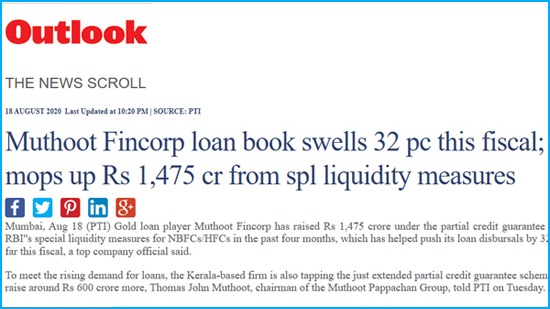 Gold loan player Muthoot FinCorp has raised Rs 1,475 crore under the partial credit guarantee scheme and RBI”s special liquidity measures for NBFCs/HFCs in the past four months, which has helped push its loan disbursals by 32 per cent so far this fiscal, a top company official said.

Muthoot FinCorp has received Rs 1,475 crore from public sector banks under the partial credit guarantee scheme 2.0 of the government and the Targeted Long Term Repo Operations (TLTRO) launched by the RBI, in the last four months, he said.

“During the past four and half months of the current financial year, we have disbursed Rs 11,500 crore, up from Rs 8,750 crore in the same period last fiscal, to 2.5 million customers. Of the fresh disbursals, 75 per cent are to MSMEs including the nano and micro-retailers,” Muthoot said.

He said the firm will tap the PCGS to raise around Rs 600 crore more as scheme has just been extended by three months.

Muthoot said the company is witnessing credit demand from all segments of customers, including students for purchase of laptops to facilitate online education as schools are closed due to the pandemic driven lockdowns.

The finance ministry on Monday extended the PCGS 2.0 by three more months to November 19.

Under the scheme, the government provides 20 per cent of the first loss that banks may face from this exposure.

The PCGS was announced on May 20 for three months as part of measures to help companies and individuals hit by the pandemic.

The scheme allowed public sector banks to purchase bonds or commercial papers worth Rs 45,000 crore from NBFCs/HFCs. But banks have only bought Rs 21,262 crore from 90 entities so far.

Along with the PCGS, the Reserve Bank had announced TLTRO to infuse liquidity into NBFCs and HFCs under which it offered special liquidity to them worth Rs 25,000 crore.

Muthoot also said the faster loan growth was driven by the new gold loan schemes it launched since May, including gold loans for nano and micro enterprises, MSMEs, students and other segments. PTI BEN ABM ABM