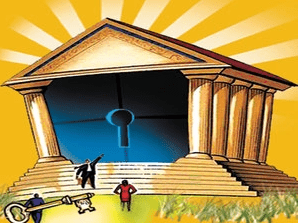 MUMBAI: The Rs 20,000-crore private security industry in general, and the ATM security sector in particular, is in for a big churn if plans of the Kerala-based Muthoot Pappachan Group to meet their safety needs of the financial sector players pick up.

The Kochi-based diversified group has also roped in Raman Srivastava, the ex-Kerala top police officer and also the former director-general of the BSF, as its chief security advisor, the company said.

“While we see large potential for every company that employs private security and needs technologically advanced security solutions, we see an immediate potential from the banking sector, especially for their ATM security,” he said.

Muthoot said the company is in discussions with a leading ATM security provider to offer ERT services to the around 2-lakh-odd ATMs deployed across the country.

Stating that banks lose heavily in their ATM business, primarily due to the huge cost involved in deploying security personnel, Muthoot described manned security as a sheer waste of resources as technology like the one his company offers can take care of such needs. He also said ERT-based security services are in vogue in the Western markets.

He said banks on an average spend around Rs 50,000 a month to protect an ATM alone. This works out to be around Rs 1,000 crore for the sector a month that has around 2 lakh cash vending machines deployed.

Last year, largest lender SBI NSE 1.11 % said it had lost over Rs 350 crore in its ATM business, a good portion of which was spent towards manning these machines that count around 60,000, making it the largest operator of ATMs in the country.

“If banks adopt our technology tool, they can save hundreds of crores in security cost alone,” Muthoot said, adding, “Muthoot FinCorp alone had spent Rs 70 crore last year on security cost, which is one-third of its net profit. My objective is to bring it down to around Rs 10 crore a year.”

Explaining how the ERT works, Muthoot said the company has already set up 16 control rooms at key cities in the country.

“Once any of these control rooms gets a call/alert from the electronic sensor fitted at every ATM, our security team in the immediate vicinity gets alerted and they can reach the trouble spot in 20-30 minutes,” he said.

“Each of the control room can handle around 30-25 Muthoot FinCorp branches spread across a 20-km radium,” Muthoot said, adding “if we get more customers, then this 20-30 minutes response time can be halved 10-15 minutes,” Muthoot said.

He further said currently the facility is being offered to his Muthoot FinCorp branches in Kerala and Tamil Nadu. Soon, it will be extended to Karnataka and Andhra. The company has tied up rival Muthoot Finance NSE 3.87 % to offer the service to its branches in Kerala and Tamil Nadu from next month, which will be gradually ramped up to other states, the chairman said.

He further said currently the facility is being offered to his Muthoot FinCorp branches in Kerala and Tamil Nadu. Soon, it will be extended to Karnataka and Andhra. The company has tied up rival Muthoot Finance NSE 3.87 % to offer the service to its branches in Kerala and Tamil Nadu from next month, which will be gradually ramped up to other states, the chairman said.

Muthoot said each ERT consists of a specialised team of three-able bodied persons in uniform, equipped with non-lethal weapons, GPRS, wireless communicators and fully-equipped vehicle with alarm systems and who can handle any security related exigencies from 9.30 PM to 5.30 AM.

The Muthoot Pappachan Group have interest in financial services, automotive, property, hospitality, and alternate energy. It employs over 20,000, serving over a million customers.

The group’s main companies include the gold financing arm Muthoot FinCorp, Muthoot Housing Finance, Muthoot Capital Services, which is the only publicly traded entity from the group and offers vehicle loans, and Muthoot Microfin.

The group’s hospitality arm has star hotels run by the Taj and Hilton groups, Villa Maya the exclusive restaurant and SkyChef the air catering unit.
Originally Posted on: