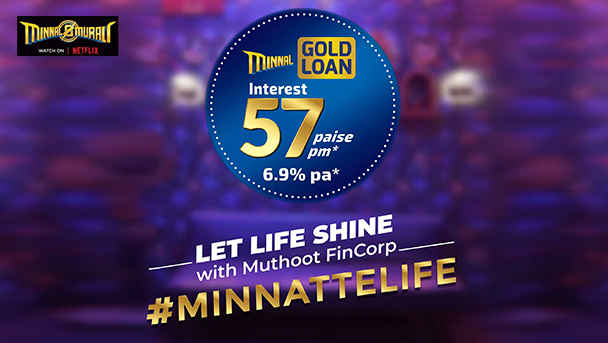 The film, directed by Basil Joseph, premieres on Netflix on December 24

Muthoot FinCorp has come together with the streaming entertainment service Netflix, to celebrate the launch of the first Malayalam superhero film, Minnal Murali.

Muthoot FinCorp’s campaign ‘Minnatte Life’, which means let life shine forth, builds on ‘transformation’, one of the core themes of the film, Minnal Murali to inspire people to use the right opportunity to change their lives for the better. The campaign’s musical ad film shows how the life of people in the fictitious village ‘KurukkanMoola’ changes at the speed of lightning and endeavours an infusion of hope, self-confidence and resilience.

Starring Vinay Fort, Hareesh Kanaran and Madonna Sebastian, the ad film is directed by Basil Joseph, also the director of Minnal Murali, along with Jomon John. The composition is by Shaan Rahman. The campaign, with its evocative message, will air across multiple print, TV, outdoor and digital channels and extend through on-ground activations across South India, including Kerala, Karnataka, Tamil Nadu, Andhra Pradesh and Telangana.

“We believe that we aren’t just into the business of finance but in the business of transforming lives. So when this partnership with Netflix was mooted and the storylines were discussed, we instantly knew this was an opportunity to communicate our message through Minnal Murali and its theme. Our duty is to bank the unbanked or the under-banked of the country through lifecycle financial products, empathetically designed to suit the needs of each segment and thereby, change lives for the better. The huge fan following of this film will help us deliver the message of ‘transformation’ to audiences across segments,” commented Thomas George Muthoot, Director, Muthoot FinCorp Ltd.